Annoying Orange is making a lot more money than you think, by the way

It’s no secret that, in the past 8 years, I’ve spent an awful lot of time on YouTube.  I was there for the advent of Brookers (first YouTuber with a TV deal!), I remember when LisaNova was doing movie parodies with her boyfriend (before Disney bought their Maker Studios for a zillion dollars) – heck, I remember when Shay Carl only had 3 kids!  And let’s not forget the drama that ensued when the world found out that lonelygirl15 was actually an actress.

I also remember how everyone thought it was some sort of dumb site for teenagers, then realized that maybe it was sort of interesting but that the huge amounts of data required to store and serve all kinds of videos was going to prevent it ever being monetized. I remember when the early YouTubers started complaining about how people like MiaRose were ‘exploiting’ the site for ‘commercial’ purposes…

Well, YouTube’s a very different place these days.  The old guard – Smosh, MysteryGuitarMan, iJustine – are monetizing like crazy, the new guard – PewDiePie, Anthony Quintal, Jenna Marbles – never had any scruples about monetizing, and YouTube keeps asking me if I want to become a YouTube Partner so I can make money from the 34 views I get for videos I post of my daughter.

However, you may not realize just how much money YouTube is making, both for itself and for its content creators (that would be people like Shay Carl, Jenna Marbles – and me – who post original videos). The pre-roll video market is booming, and even with the ‘skip this ad after 5 seconds’, YouTube is still managing to get more high-quality, verified eyeballs than most video ad serving channels.

But don’t take my word for it.  Here’s an infographic that might make you wish you bought that digital video camera 10 years ago.

You know, when I post these infographics that I find on other sites, I really try to offer some insightful commentary about them. That way it’s not so much that I’m stealing them as sharing them.

But I don’t have a whole lot to say about this one, except that I – as a person who can remember when we stopped saying ‘social networking’ and started saying ‘social media’ – like looking at timelines like this. I’m not sure why, since it only reminds me just how much time I’ve spent (wasted?) on social media in the past 10 years. (Though I will admit to taking some pride in knowing that I was among the first 700,000 people to sign up on LinkedIn, back when you still had to spend 10 minutes explaining to people what it was.)

And of course there is my usual caveat, which is that it can be dangerous to trust the numbers on an infographic. I mean, MySpace may still have 36 million registered users from people who signed up in, like, 2003, but I’m pretty sure you’d have a hard time finding a single person you know who’d actually visited MySpace in the past 3 years.

You’ve probably heard about Restoration Hardware’s recent infamous catalogues:  Since early May, RH has been sending out bundles of its ‘source books’, each weighing 12-17lbs, depending on the assortment.  (A 12lb bundle arrived here, though I can’t remember the last time we bought anything from RH, and in fact I’ve always hated their insistence on using US dollar pricing in their catalogues.)

Here’s an example – this is the 15lb bundle:

Predictably – at least to anyone living in the real world, which apparently excludes everyone on the Restoration Hardware marketing team – the internets were quick to respond with derision, mostly on environmental grounds. The twitterverse has seen a more or less constant stream of ‘WTF?’ and ‘Are you kidding me?’ tweets for 6 weeks or more, and even die-hard RH fans were left dismayed and disappointed by the whole thing. There are several Facebook groups and pages calling for the abolition of RH catalogues.  In Palo Alto, residents organized a mass return of the catalogues to the local store, dumping 2000lbs of the ‘source books’.

All the catalogue bundles were accompanied by a message about how even though they seemed big, they actually had a lighter carbon footprint: 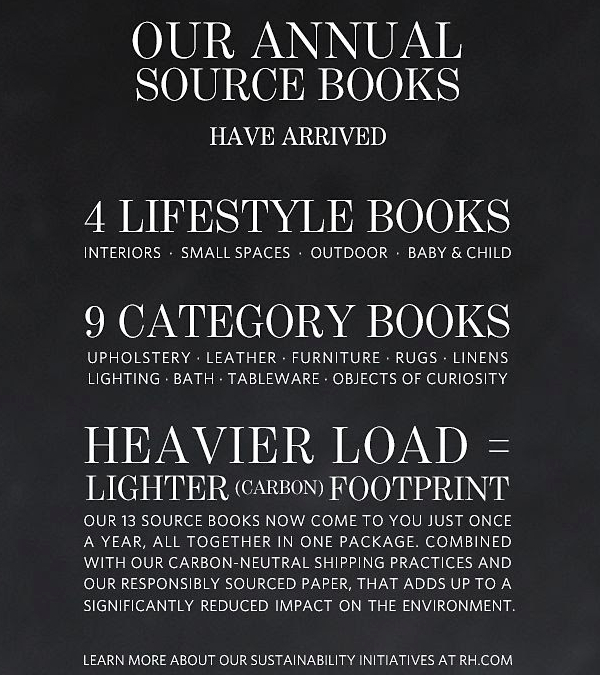 …except Ben Elgin at Bloomberg did some research and discovered that RH’s ‘sustainability’ claims were dubious at best.

Received wisdom – well, received wisdom amongst marketing and media and innovation and ‘disruptor’ types – is that social media is Powerful and Relevant and Resonant, and that it’s imperative that when you get this kind of negative reaction, you need to start doing hard-core damage control.  You need to get a dedicated Twitter account going to respond to criticism, post a heartfelt and sincere mea culpa on your website, make a large donation to some kind of environmental charity – heck, maybe you should start a whole division dedicated to the elimination of paper-based catalogues worldwide.  Because otherwise people will Abandon Your Brand.

Restoration Hardware has done none of this.  They’ve largely ignored the social media frenzy, and have consistently dodged questions even from mainstream media.

With 3+ years worth of catalogue criticism behind them, and sustained outrage on various social media channels, Restoration Hardware should be seeing declining sales, as consumers flee from a retailer so clearly out of touch, shouldn’t they?

As it happens, they’re reporting a 20% growth in revenue, beating estimates.  A couple of weeks ago, TheStreet,com reported that “RH stock [was] spiking”. NASDAQ.com says they’re “[Hitting] new high[s] with grand designs”.  And they’re still getting sympathetic coverage in home decor media. (I do think it’s interesting that the Restoration Hardware site hasn’t posted any media coverage in a couple of years, but there could be any number of reasons for that. Even big companies forget to update their websites sometimes.)

What does this say about the power of social media for brands?

Look, I love social media, and I believe in it.  Heck, I get paid to help clients manage their social media and content marketing efforts – and while I may be jaded and cynical, I’m not so far gone that I’d take money from clients for social media management if I actually thought it was a waste of time.  I think social media can be a great way to increase brand awareness, improve brand credibility, deliver long-term nuanced messages, and provide great CRM.

We have to admit a few things:

Now, I happen to think Restoration Hardware is playing a dangerous game here.  I think that in the long-term they’re going to find that a determined refusal to respond to critics – especially when that criticism turns up in mainstream media channels – is going to have an impact on sales.  Their flimsy environmental claims may prove to be their Achilles heel in a world that increasingly demands transparency and authenticity.

However, in the meantime, I also think we have to acknowledge that perhaps social media isn’t quite as powerful as people with ‘Disruptor’ in their job title would have you believe.

I dare you not to love this

I admit that I went into this ad prepared to roll my eyes.  “Why can’t they just do after-school specials and Judy Blume books like they did when I was a kid?” I thought to myself.

And then I laughed my head off.

I don’t even think you have to be a woman or the mother of a daughter to love this.

You know, I’ve secretly been making fun of all the advertising types in Cannes this week, droning on about one must always strive for The Big Idea and how we must, at all costs, be Creative, but sometimes, when it all comes together like this, you realize they’re right.

Roslyn Costanzo of Style Forage, looking more sophisticated at the park than I ever will

Here’s something they don’t tell you about new(ish) motherhood:  It’s hard to make mom-friends.  Oh, you interact with mums of babies and toddlers all over the place – at drop-in, at the park, at baby music classes – but half the time one of you is harassed or sleep-deprived or rushing to get to a food source before baby goes nuclear.  Or, 10 minutes into a nice chat, the other mum says something like “I’ve been using fish oil as a substitute for vaccinations – I’m just so worried about Bobby getting autism”, and suddenly it’s like you’re reliving every traumatizing blind date with a nutjob you ever had.

So you can imagine how nice it was when, yesterday at the park, I met a mum who met my standards for laid-back-ness (she didn’t seem fazed when Fiona, spotting apple slices at 50 paces, took up residence on her picnic blanket until the apples were well and truly eaten). Forced to speak at some length due to the apple situation, it emerged that Roslyn – for that was her name – is, like me, doing a lot of freelance writing while she’s at home with her 3-year-old.  She does glamorous PR/bylined articles while I do a lot of (much less glamorous) ghosting, but still.  Anyone who writes for a living is fine by me.  Well, except maybe Dan Brown.

Anyhow, I checked out her blog today and found a great piece on how – and why – even the most stylish of mums so often slip into a 24/7 yoga-pants-and-tank-top uniform that can be difficult to shake.  (I myself have 4 pairs of black leggings on constant rotation at the moment, and it’s hard to believe I ever wore high heels 5 days a week.)

I may never see Roslyn again (especially now that she probably thinks I’m a stalker for Googling her after a chance meeting in the park), but in the meantime it was a good reminder that there are plenty of interesting newish mums out there, even if they’re hiding their lights under bushels of well-worn black spandex.